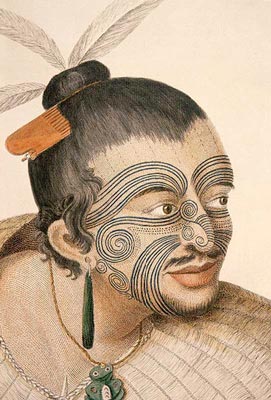 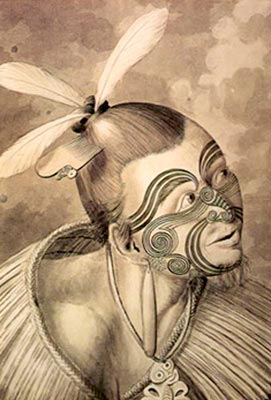 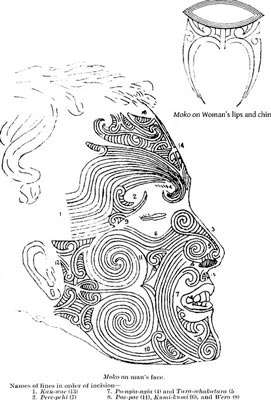 According to Maori mythology, the practice of tattooing originated in a love story between a young Maori warrior named Mataora (meaning the “face of vitality”) and a young princess Niwareka of the Turehu clan whose home is in the world below, the world of spirits called Rarohenga.

One day, Niwareka climbed into the top world with a dance group and met Mataora. He was dazzled by this beautiful girl and wanted him as a woman.

They were married and lived together for some time, when Mataora became jealous and furious and beat his wife. Niwareka fled immediately to join his father Uetonga in Rarohenga.
You ruined my tattoo!

Mataora, heartbroken and repentant, went looking for his wife in the underworld and tried to win her back. After many trials, and after overcoming many obstacles, Mataora finally arrived in the kingdom of Uetonga.

But after his long journey, the paint on his face was dirty and damaged, and Niwareka’s family made fun of Mataora’s pitiful appearance. Humiliated, the young warrior implored his wife’s pardon, a pardon that she accepted.

Upon arrival, Mataora saw Uetonga, Niwareka’s father, tattooing a person. He discovered that the tattoo was made by puncturing the skin and that it was not just a mark on the skin. Uetonga told him that it was their way of tattooing in the underworld and stretched out his hand to wipe all the drawings of Mataora’s face. Everyone laughed at seeing the drawings erased.

Mataora says:
“You’ve ruined my tattoo, now you have to do it again. “
Ta Moko, The art of Maori tattoo

So Uetonga called those who were designing the tattoo designs and told them to draw them on Mataora’s face. He then began the tattoo by piercing with his tool along the already drawn lines. Mataora now experienced the intense pain of being tattooed. Niwareka’s father then proposed to Mataora to teach him the art of tattooing (Moko).

Mataora took many years to master this art and when that was done, he returned with his wife to the human world by bringing in Ta Moko, the art of the Maori tattoo.