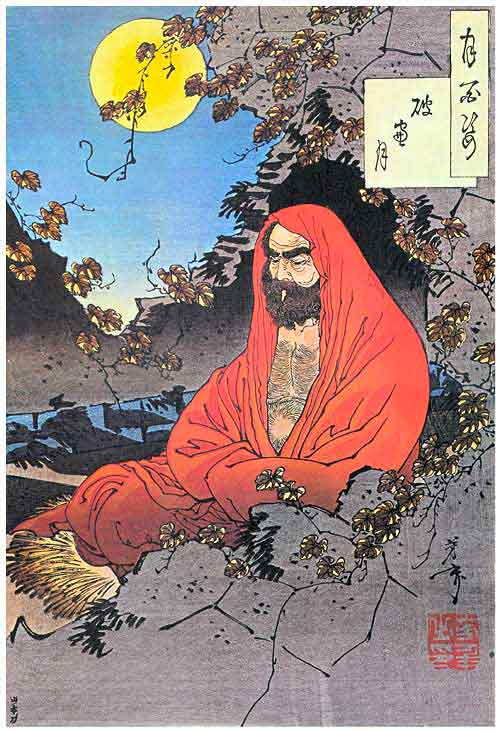 They are also known as “wishing dolls” and are meant to help keep people focused on achieving their goals.

Daruma are still usually made of papier-mâché, have a round shape, weighted at the bottom so that they will always return to an upright position when tilted over. This characteristic has come to symbolize the ability to have success, overcome adversity, and recover from misfortune.

The face in the Daruma doll is modeled after a famous Buddhist named Bodhidharma, who was known throughout China and Japan during the 5th century.

Bodhidharma means “cosmic awakening” in Sanskrit and is a man who personifies the state of Enlightenment on Earth and serves as a representation of the Buddha and his teachings.

The Bodhidharma was also known in China as the creator of Chan Buddhism while in Japan he is the founder of Zen Buddhism.

Not only is Bodhidharma famous for his early Buddhist teachings and his eccentricities, he also created Shaolin Kung Fu, which is has been one of the most popular forms of martial arts for centuries.

Bodhidharma formed the ancient art when he observed the poor health exhibited by the monks of the Shaolin Monastery.
Because of this, the Daruma is also associated with health and discipline.
He is a man that many people believe embodied determination and enlightenment which has lead the Daruma doll to represent these characteristics as well.

The eyes of Daruma are often blank when sold.
The recipient of the doll fills in one eye upon setting the goal, then the other upon fulfilling it. In this way, every time they see the one-eyed Daruma, they recall the goal.
There is also a burning ceremony for these dolls at the end of the year, people go to the temple where they received them and this is called Daruma Kuyo.

They give thanks to the doll, purchase new ones and send them on there way burning them with all sorts of other figures and dolls.
As far as looks go, they are unique to the eye, surreal almost.
On the face, one eye signifies your commitment and the other is a way of saying “thank you” to the Daruma doll itself for its help.

Feminine Daruma Doll Tattoo
Although the original doll is a rough masculine symbol, there are also feminine representations of the Daruma doll called the Princess Daruma or the Lady Daruma.

These renderings of the round dolls are painted bright pink to emphasize the femininity and may feature floral patterns.
With these designs, the doll is generally painted to resemble a woman rather than the staunch appearance of the usual face.

There are also many color options to fit your desires! The different colors of the dolls represent different things:
red is for good luck or fortune, purple is for health and longevity, yellow is for security or protection, gold is for wealth and prosperity, and the color white is for love and harmony.