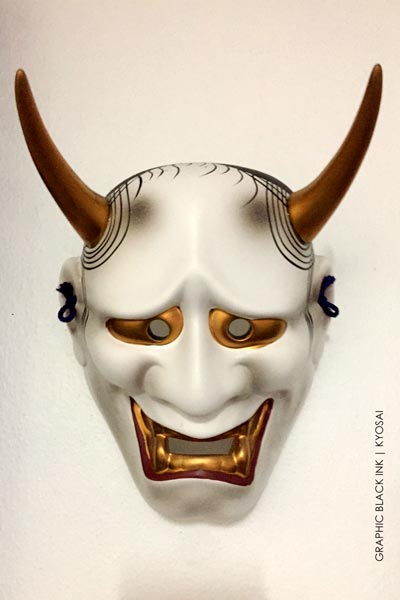 The first saved Hanna mask is from 1558.

Hannya mask is one of the most recognizable masks in Noh plays.

The Hannya mask is used in Japanese noh and kyōgen theater shows (classical musical performances based on Japanese folklore and the supernatural).

Noh is classical Japanese musical drama based on tales from traditional literature performed since the 14th century.

In the story, supernatural creature transforms into human shape and tells the story.
The actors tell a story through gestures and appearance in masks. They capture the essence of the story.

The mask represents a tormented female demon overtaken by jealousy and contempt.

One of the most popular plays that utilized the Hannya mask tells the story of Prince Genji, who was married to Lady Aoi but had a mistress named Lady Rokujo.

When his wife became pregnant, Prince Genji started to ignore Lady Rokujo.
As a result, Lady Rokujo turns into a immensely jealous woman and is overcome with violent anger.
With blinding rage, she transforms into a demon and possesses the wife and kills her.

Some stories say that the mask got its name by monk artist Hannya, who perfected this mask and that he needed a great wisdom to make this mask.

The perfection of transcendent wisdom is the perfect way of seeing the nature of reality so that you can protect yourself from the female demon.

The fearsome Hannya is a jealous female demon.
Like onnamen, Hannya masks display a complex number of emotional states depending on how the light catches the features of the mask. Like most Noh masks.

When an actor wearing a Hannya mask looks directly at the audience they see an angry female face; however, if Hannya looks at the ground, the relected light creates the illusion almost as though she is crying.

The different colors of a Hannya mask represent the different standings of the character :

a white mask means a woman of refined character,
red is for those who are a little less refined,
while the darkest of reds is reserved for the evilest of all the demons - a woman who has lost complete control of her jealousy.

The Hannya mask represents jealous female demon, serpent and sometimes dragon is used in Japanese noh and kyōgen theater shows (classical musical performances based on Japanese folklore and the supernatural).

Kyōgen is a form of traditional Japanese comic performance in theater. He was executed as an intermission between the acts of Noh.

This mask represents female rage and pain, and it is used when a particular character needs to be invoked.
These two emotions are difficult to capture at the same time. It represents female obsessed with a devil or taking a devil form of being.

The expression of Hannya mask is at the same time demonic, angry, frightening, dangerous and tormented, sad, heartbreaking, melancholic and sorrowful.She begins as normal female, but when she is betrayed, get angry and jealous she turns into a demon.

The Mask is a Japan symbol of a good luck and it wards off the evil. Hannya Mask is popular tattoo motif.

The Hannya is one of the more popular subjects used in Japanese-themed tattoos.

The mask Designed with has a learning mouth, sharp teeth, metallic eyes (because it is not human) the mask looks terrifying and with two sharp devil-like horns.

Hannya is a female character, which expresses the sadness and anger from jealous. That is why this is so scary and she even has horns. Fiery eyed demon is one of the main characters in the Noh theatre.

It´s not so well-known but there are three kinds of Hannya masks.

Shiro Hannya (白般若/ white hannya) is the most elegant one. The skin is still white, which expresses the jealous of noble woman.

Aka hannya (赤般若/ red hannya) has a slightly red face. She is a half way to the complete insanity. The hair starts to be messy.

Kuro Hannya (黒般若/ black hannya) looks even more sad. She has gone completely insane and converted into a demon.

Red Hannya and black Hannya are so jealous that they have lost control and even kill people and eat them for the grudge. This is the personality of the Hannya in the theatre piece, Kurozuka (黒塚/ black mound).

ORIGIN OF THE WORD HANNYA

The word Hannya is thought to have come from the artist, Hannyabô, who carved this wooden mask.

The design is believed to have been adapted from earlier serpent masks. Another theory is that “Hannya” comes from the word “Paññā/Prajñā” (般若), which means "wisdom" or "higher consciousness" in Japanese Buddhism.

One tradition states that this name was given to this mask because it was the name is after the mask maker, Hannya-bo (般若坊) who lived in the mid Muromachi era (室町時代, 1336-1573).

An alternative explanation is that the artist would need a great deal of wisdom in order to create this mask.
Then his son, Ze-ami (世阿弥) refined it and established more artistic way.

The Noh (能), one of the most well known traditional Japanese theatre as well as Kabuki (歌舞伎).

Noh was introduced from China to Japan in Nara period (奈良時代/ 710-784) as a variety of theatre plays and in the late 14th century, it was formed as the base of Noh by a legendary actor, Kan-ami (観阿弥) as we know now.

Kyōgen is a form of traditional Japanese comic performance in the theater. It was performed as an intermission between Noh acts.

Shinto is an ethnic religion in Japan, and it focuses on ritual practices. Kagura is a type of Shinto theatrical dance.