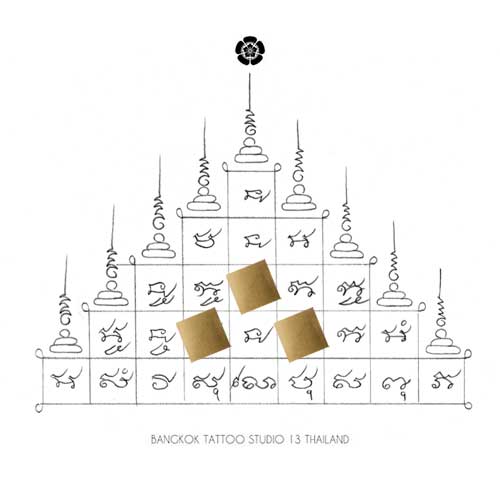 Popular for Tattooists or For Thai People.

The belief in tattooing a talisman is a personal belief that changes according to the times, is a talisman with Buddha's virtue and was popular among ancient warriors.

Yant Kao Yod Meaning and Belief The Yant refers to the 9 wonderful qualities of the Buddha, which are shown in the form of the 9 spiers. This talisman tattoo is good for protecting all weapons.

The Sak-Yant Gao Yord is the “Yant Kru” or Master Yant and is a most sacred Buddhist tattoo with very wide ranging powers of protection and is quite possibly the most important of all the available Sak Yant designs.

This Yant is often one of the first tattoos you have with your master's degree " Ajarn " ,it is of great importance, and must be placed at the top of the body It is considered a teacher's talisman.

The basic design of the Gao Yord represents the nine peaks ( 9 Spears Or 9 Peaks ) of the mythical mountain of the Gods, Mount Meru.

what is this, the peak of meru ?
Link To: The Legend of Peak Meru

What is the 9 peaks on the gao yord ?
You can see the example below in picture. 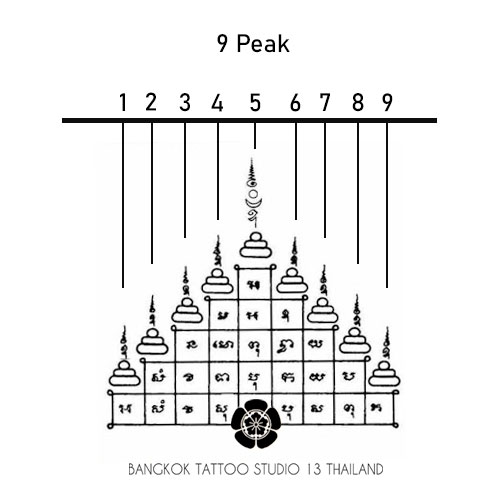 The set of 3 ovals are a representation of the Lord Buddha and this grouping of 3 ovals can be seen in many other Sak Yant designs. The Yant Gao Yord has 9 Buddhas represented, with each Buddha bestowing special powers or spells.

What is the unalome & 3 Ovals.
You can see the example below in picture. 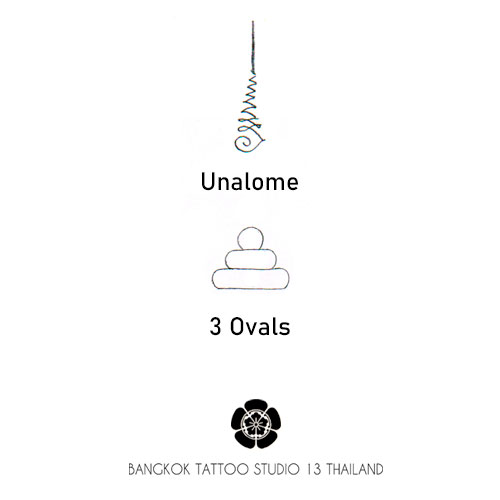 The Sak Yant Gao Yord will protect the wearer against evil spirits and all forms of “Black Magic”.

In some versions of the Gao Yord, there is a Mantra or Katha tattooed at the base of the design.

-Protection from Danger and Fatal Accident is Famous for its Invincibility.

Those who tattoo the nine top talisman to hope for the Buddha's virtues There is a belief in the power of Yant Kao Yod as the culmination of Yantra Mahaniyom and avoid safety Prevent dangers from all weapons, however, tattooing has been believed since ancient times.

-The placement of the Gao Yord
The place is atop the back along the spine.

-There are many prohibitions in order not to deteriorate power.

"Yan Kao Yod" is taken from the script of Itipiso, meaning 9 wonderful qualities of the Lord Buddha by drawing a pattern of 9 peaks, namely:

-What is the prohibition of Yant Kao Yod ?

Yant with a Buddhist meaning regarded as belonging to a teacher Those who tattoo the talisman often follow the principles they hold in order to prevent the Buddha's deterioration. The prohibitions of tattooing the nine yod yantras are:

1. Do not insult your parents or teachers.
2. Do not spit into the toilet.
3. Do not have sex while the woman is menstruating.
4. Do not engage in oral sex.
5. Do not offend children, offender wives, adulterate with other husbands and wives.
6. Do not use drugs.
7. Do not eat zucchini, fang, zucchini.
8. Do not pass through the clothesline.
9. Do not eat licorice

-How many types of Yantra Kao Yod are there ?

Currently, there are disciples of famous monks.
Open many tattoo amulets Some people tattoo according to their beliefs.

Some people tattoo for beauty, including making tattoos attached to the skin for sale instead of real needles.

Therefore, if you are interested in the Buddha's virtues, then you need to study it thoroughly. in order not to violate the practice, wrong intention unknowing deterioration.

Those who receive tattoos must behave in good morals. and continually making merit.